More than two thirds of the world's plant species are found in the tropical rain forests. In the third layer, the understory is always humid and it receives about 2 to 15% of light. This layer includes trunks of canopy trees, shrubs, plants and small trees. The rain forest plants made adaptations to their environment. With more than 80 inches of rain annually, plants made an adaption to help them let water  fall off their leaves quickly so the branches don't get soaked and break. Many have drip tips and grooved leaves or oily coating on their leaves to help shed off the water. Since there is not much sunlight in the dark understory, their leaves are very big to absorb as much sunlight as possible, while leaves in the upper canopy are dark green and small to lessen water loss from the strong sunlight. Bromeliads grow in the upper canopy on the larger trees to get sunlight. Many tress have buttress and silt roots for support in the wet, flat soil of the rain forests. 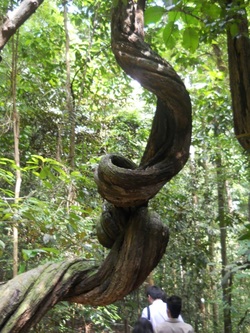 Lianas Vine starts off as a small shrub on the ground and depend on other plants for its source of light. When Lianas gets bigger, they grow towards other plants and use their trunk to grow upwards. They rely on other trees for support so they develop little structure to support themselves. Although they take other trees for support, the gather their own nutrients. Lianas grow upward by stem twining, grasping leaves and branches that comes out from the trunks from other plants, making changes to their leaves and branches to fit other trees, and thorns and spikes that attach it to trees. Once it reaches the canopy layer, it begins to spread from tree to tree. Since there are so many Lianas, some trees will drop a limb to get rid of them. Because of this, Lianas adapted to coil and bend to create a spring-like shape. This help by absorbing the shock of limbs falling on them and help them stay alive. 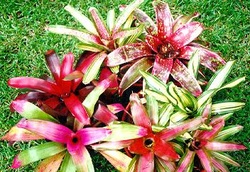 There are over 2,700 species of Bromeliads, but one of the most-known is the Pineapple. These flowers normally have bright red, orange, purple or blue flower. They can grow on the ground, on the rocks, or even on other plants and trees. They have the ability to absorb nutrients and moisture from the atmosphere and are sometimes called the "Air Plants". Many of this plant grow on branches, causing the branches to break under their weight.  Most Bromeliads have stiff, overlapping leaves that can hold rainfall. Leaves and debris fall in and help single-celled organisms grow, which feeds on insect larvae and other organisms. The Bromeliad is like a small ecosystem inside itself. 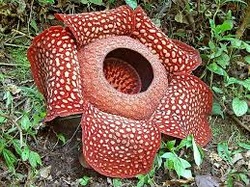 The Rafflesia Arnoldii is the world's largest flower. The Rafflesia doesn't produce any leaves, stems or roots but depends on the Tetrastigma vine. It can be found in the tropical rain forest of Indonesia. Weight over 7 kg and about one meter wide, the Rafflesia Arnoldii is one of the world's rarest and most endangered plants. Inside of the plant is a spiked disk. Flies pollinate this plant because they are attracted to its smell. For 12 months, it grows to a cabbage-like and bursts around midnight, but the full grown flower only lasts for about week before it dies. 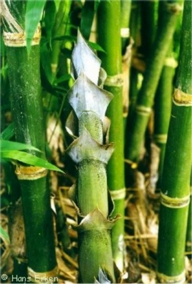 The Bengal Bamboo is found in Southeast Asia Rain Forest. It frequently grows in patches in the forest. It lives very well in moist environment with lots of rainfall. This bamboo can grow up to 40 to 80 feet. It has a dark green stem and its leaves are long and narrow that grow alternately on the opposing side of the stem, usually in two rows. The bamboo is not a tree or a shrub, but it is a grass. They are fast growing, in about two to three months, it is fully grown. They bloom once in their lifetime and dies after they bloom. This species life span is from 25 to 40 years. The Bengal Bamboo is important to the environment. It takes in water from heavy rain that could cause a flood, provides shelter for animals, and reduce soil erosion. It is physically adapt to its environment by growing tall fast to get lots of rain and sunlight.

The Bougainvillea grows in the Amazon Rain Forest. This flower prefers a tropical climate, where it can climb onto other plants to reach the sunlight. It can tolerate semi-shaded areas and full sun areas, but can not live in swampy areas. The plant can reach over 30 feet. It can either be vines, trees, or shrubs with sharp thorns. The leaves are dark green and is shaped like hearts with drip tips at the end. The Bougainvillea comes in several different colors, like red, pin, white, and yellow. One of its adaptation is having hooks so it can climb onto other plants for support. 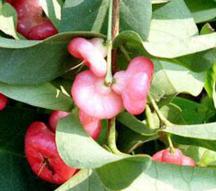 Jambu is a small tree or a shrub which grows about 10 to 20 feet. It leathery leaves grows on opposite side of each other on short, but thick stems. They are pink when young and becomes dull, light-green to yellowish-green when, matured. They have a faint fragrance and grows in clusters. The Jumbu fruit has a shiny, thin skin that is shaped like a pear. The inside of the fruit is white or pink, has a faint fragrance, and juicy with a sweet flavor. It has seeds, which together with the rots are considered poisonous.

Many beliefs are that Banana trees are not trees but giant herbs,reaching their full height between 10 to 20 feet after a year. Every banana blossom blooms into a fruit, which will be ripe enough to eat after three or four months. After the fruit is grown, the stem dies off but is replaced by a new one. The number of bananas produce depends on the plant. Banana trees are approximately 93% water, even moderate wind can knock them down. Banana Tree grow in humid, tropical areas of Central and South America, Africa, and Southeast Asia where there are high temperature and rainfall. 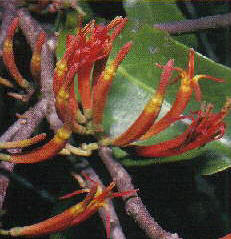 The Tropical Mistletoe is found on growing trees , it was spotted by a team of scientists from the Royal Botanic Garden. Colin Congdon first spotted the hairless plant, and realizing it was different from other species, he took a closer inspection on it. The Tropical Mistletoe grows up to 50 cm tall and attaches itself to branches of small trees. 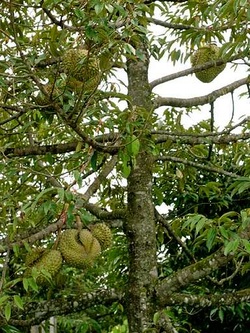 In Southeast Asia, the Durian is thought to be one of the most ancient and primitive trees. It grows in the lowland rain forest.It has large fruits from its branches and trunk. The Durians lifespan is from 80 to 150 years, but can live longer than that. It is believed that Durans only die when it is blown by a storm or cut down. They can grow to 90 to 130 feet tall. Its has drooping leaves that are evergreen. they have a rounded base and is pointed at the tip. The flowers have a strong odor which a attracts a small bat called a Dawn Bat. They grow on the trunks and the main branch in clusters. The most known part about the Durian tree is its fruit. It is shaped like an egg and can weigh up to 18 pounds. When the fruit is ripe, walking under the tree can be hazardous to your health because the rind is covered with densely spines. Durian is one of Southeast Asia's favorite fruit, there it is known as the "King of Fruit". 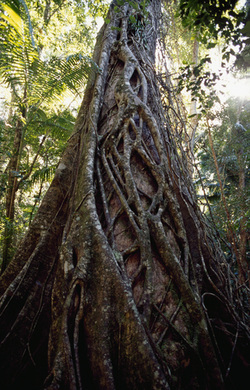 The Strangler Fig is considered  one of the most important plants in the rain forest ecosystem. It is also known as the Banyan Tree. Hundreds of animals like the parrots, toucans, hornbills, and monkeys feed on the sweet fruit on the fig tree. Figs are considered a "keystone" because they are very important to the animals living in the rain forest. They bear fruits several times a year. Different species of figs are produced, so there is a large supply for the animals. In some rain forests, up to 70% of the animal's diet depends on figs. The Strangler Fig can grow up to 148 feet. Starting from the forest floor and reaching the canopy is a strange story. The forest floor is hard for a seedling to grow, because there is barely any light and a lot of competition for water and nutrients in the soil, but it has made adaptations to survive these things. Strangler Figs have an aggressive growing habit, helping it grow. In the canopy, it has huge leaves that take in lots of sunlight and it also have a thin buttress.
Powered by