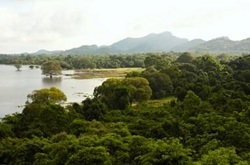 The Tropical Rainforest made up 14% of the Earth's surface, now there are only about 6% left that covers the land. This 6% of land features mountains, valleys, flood plains, streams, rivers, and a little bit of wetlands. It also contains high and lowlands, beaches, as well as some karsts. A mountains the natural elevation on the Earth's crust that is caused by the Earth's moving tectonic plates crashing into each other. Mountains could be seen in the South American, Asian, Australian, African, and Pacific Island rain forests. A highland is somewhat like a mountain, but not exactly. Its a mountainous region that is conserved for ranges of low mountains. In the Tropical Rainforest, a valley is usually in the shape of a 'U' or 'V'. A valley or dale (a broad valley) also provides channels for rivers. Flood Plains form at the base of a valley when a stream or river gets tangled together. Karsts is a landscape that is known for its sink holes, caves, and underground draining systems. Wetlands include marshes, bogs, and swamps. Many people mistaken the rain forest for a wetland, but the the two are in fact, different. The wetlands have saturated soil and could contain water more than a foot deep underground. It has moister environment while a Rainforest would receive a lot of rainfall that would be absorbed through the plant roots or the ground. Parts of the Rainforest may consist of wetlands though. Streams and rivers are also another landform that is blurred. Rivers are much larger, deeper, and longer than a stream. Also, a river is created by many steams combined. Rivers carry nutrients and could meet up with another body of water. Still, both are linked by channels and are gushing bodies of water. A famous river that flows through a rain forest is called the Amazon River. There are many spectacular beaches that accompany Rainforests too.

Mountains are a landform that is formed by the Earth's tectonic plates crashing into one another. The highest Tropical Rainforest mountain is the Pica da Neblina located in the Amazon Rainforest.  It was proven by scientist that there were more biodiversity on a tropical mountain than a temperate mountain. Meaning that they had more varieties of species. Sadly these species are decreasing by the day. 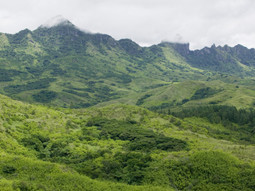 In the highlands, the weather is different from the rest of the Rainforest. The highest temperature up in the highlands are about 70°F and the lowest is about 50°F. That cool weather keeps different animal and plant species from living in the hot sun and to maintain hydration. Highlands are a mountainous region that is reserved for low mountains ranges. 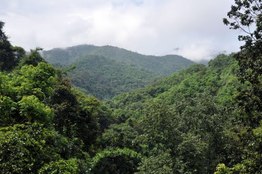 Tropical Rainforest valleys are shaped in a 'U' or a 'V'. They are usually a low land area  between hills or mountains that allows a river or stream to pass by its base. Valleys and dales are somewhat alike, yet different. A dale is the same as a valley but it is more broad. At the bottom of a valley could consist of a channel that would allow rivers or streams to connect or it may start a Flood Plain if a river or stream meets head on. 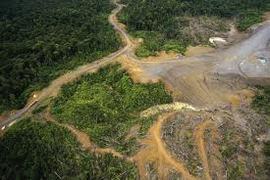 In the Rainforest flooding happens often. There could be heavy rainfall one day and end with flooding. It doesn't necessary have to do with rivers or streams running into one another all the time. Flash floods do occur in the Tropical Rainforest and when this happens, it benefits the water species. On the other hand, it makes predators that lived on that flooded land hunting for its prey more complicated. Sometimes flooding doesn't occur even when there are a lot of rainfall because the tree or plant roots suck up all the water before the rain water could reach the rivers or streams.

A Karst landscape is scattered with sink holes and bumpy hills. The Karst is shaped by the dissolving action of water. The way this landform is formed is with carbonated water from rain and soil. The raindrops collect CO2 as it falls then when it hits ground, it collects even more CO2 from the soil.The liquid begins to dissolve the bed rock over a long period of time. As this process continues, there is an opening in the bedrock that allows water to pass into the developing drainage system. Soon this leads to surface caves and how the formation of its landscape came to be. 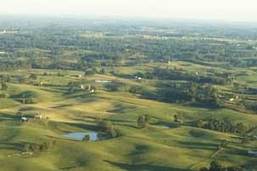 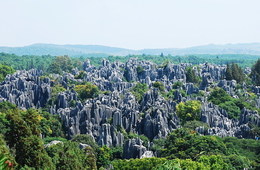 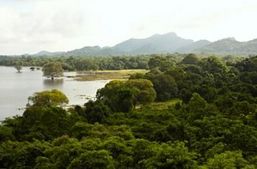 Wetlands are an area that's covered in a blanket of either fresh water or salt water. They could be a foot or more deep and could provide plant life in the water. This land represents the combination of both land and water. They exist almost everywhere except in Antarctica. With the presence of wetlands in a Rainforest, there are more land and water species! 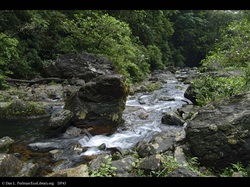 This is a stream. Streams are much smaller than rivers and sometimes when streams are so shallow, you could walk across! this body of water also does what a river does, only its size doesn't add up to a river. Both streams and rivers provide a water source for the Rainforest species living in that area. 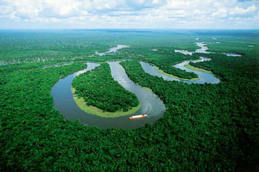 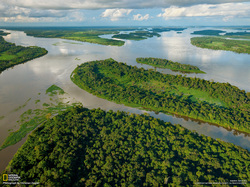 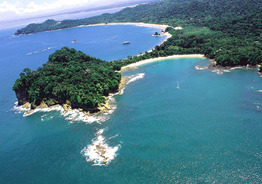 There are many beautiful sights you get from a tropical beach. Its where the waves of the ocean rush in and out. The Rainforest and its creatures is already a sight worth seeing, but with the addition of a beach makes the Rainforest a much more valuable and special place.
Powered by